Two ULFA cadres were killed at an encounter with police and army in Bagsa distict of Assam on Wednesday midnight. According to information, the encounter took ppace at Gulabeel area at around 2 in the husday wee hous as police and army were launching a joint operation in the area acting on a specific information that two ULFA cades were hiding in the area. Police later, recovered a grenade, an AK-56 rifle and a pistol from the ULFA cadres. One of the deceased was identified as Samir Nath. Details are awaited.

Permalink Submitted by Pallavi Barua on Fri, 28/08/2009 - 02:13
It's really sad that Assam and the entire country as a whole is losing its Human Resource in this way. Encounters (many a times cold-blooded murders) are doing away with the Potential Human Resource (PHR) all over. There is misutilization by misguidance of this specific Resource, which holds hope for any society.

14 Dec 2015 - 1:00pm | AT New Delhi
Congress vice president Rahul Gandhi dropped a huge bombshell against RSS on Monday revealing that the religious group attached to BJP prevented him from visiting a historic Vaishnavite place in...

21 May 2020 - 12:35pm | Shajid Khan
UDALGURI: After assuming charges of the Bodoland Territorial Council (BTC) on April 27, Assam Governor Prof Jagdish Mukhi on Tuesday visited Kokrajhar the headquarters of the BTC where he held a... 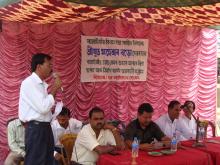 28 Oct 2009 - 7:10am | Jayanta Kumar Das
The foundation of kalaigaon Press Club building was laid on October 25 at a simple ceremony. Media persons in and around Kalaigaon have expressed satisfaction at the start of the construction works....