Raising Day and Passing Out of Cadres at Dah Rehabilitation Centre, Dinjan Cantt

After years of terrorism resulting in violence, murder and pain for the loss of a loved one, the people of Assam have banished the scourge of terrorism and stand together as a force reaching out to peace and harmony. The Dah Division in its most sincere efforts under the stewardship of Maj Gen BS Sachar, SM, VSM, GOC, 2 Mountain Division has reached out in an integrated approach with the civil administration and police to ensure that this state of harmony prevails through relentless joint operations against the remaining terrorists and to encourage maximum surrenders and returning of cadres to their families and homes.

On the initiative of Dah Division and with the active assistance from the DCs of Tinsukia and Dibrugarh the ‘Dah Rehabilitation Centre’ was established at Dinjan in Mar 2008. The courses run in the centre include Motor Mechanic, House Wiring, Fabrication and Welding, Mason & Plumber, Basic Computer Applications & Tally-9.0 and Driving. In this centre, multi-dimensional personality development of erstwhile misguided youths is what is being grossly emphasized at. Along with the pass out of seventh batch of welcome trainees, the centre is celebrating its two years of raising.

The major highlights of this seventh batch was that with the growing demand of jobs related infrastructure development and modernization of old pattern houses, Dah Rehabilitation Centre has introduced a new course of Mason & Plumber trade. Once again for the third time 100% placements have been achieved. Applications for Constable of Assam Police have been forwarded for 8 trainees and 6 trainees are being sent for advance training to Hyderabad by General Manager, District Industries Commerce Centre. Industrial visits to RVR projects, Steelsworth Pvt Ltd and Jai Guru Mata Pvt Ltd was conducted for the trainees for a first hand experience. On-Job-Trg at Gargo Motors (TATA) was conducted for seven trainees who are undergoing Motor Mechanic Course. A seminar on Personality Development was organized for the trainees by Mr. Arup Sengupta, General Manager, Centum Learning Ltd, New Delhi. Each trainee has been given four certificates namely, the State Council Vocational Training Certificate, Certificate of Animal Husbandry Department, Apprenticeship Certificate from the Dah Formation and a Driving License.

The Valedictory function for the seventh batch of 31 trainees was held at Dinjan which was presided over by Maj Gen BS Sachar, SM, VSM, GOC, Dah Division,ADC Dibrugarh, ADC Tinsukia and other officers of Dah Division and Police Officers were also present. Officials of ITI Guwahati, Tinsukia, DRDA, KVIC, lead banks and representatives of the industry were present to hand over certificates to the trainees of the Dah Rehabilitation Centre.

Speaking on the occasion, Major General BS Sachar, SM, VSM said that the commitment of the Army together with the civil administration towards the well being of these misguided youth goes well beyond the “Ceremony”. All efforts are also being made to assist them to get their rehabilitation package from the State Govt.

The Dah Division stands resolved in its efforts to bring a smile to these trainees and their families with its quest towards humble service and support to the people of Assam through genuine love and SADBHAVNA.

16 May 2015 - 10:24pm | AT News
Yet another mild tremor struck no less panic among the people on Saturday evening. Measuring 5.6 in the Rickhter scale, the tremor took place at 5.9 in the evening forcing the people in... 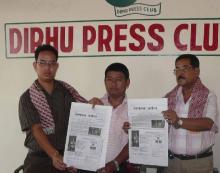