Aids distributed among poor and needy

An unusual programme was arranged at Kalaigaon on July 5 by 'Durgat Kalyan Nyas' a Kalaigaon based NGO working for providing help to poor and needy people of the locality. The programme titled 'Aakou Sadichar Aabeli' was arranged at the premise of Kalaigaon Circle Office at 2 pm. Where financial assistance was distributed among eleven meritorious but economically backward students who had shown excellence in the recent examinations and five seriously ill poor patients. The 'Nyas' was formed in the year 2007 at the initiative of DN Hazarika,the then Circle Officer,Kalaigaon Revenue Circle.

Lohit Chandra Nath,secretary of the 'Nyas' anchored the proceeding of the session,while DN Hazarika presided over it. Krishna Baro, in his welcome speech on behalf of the 'Nyas' gave in details of the recent welfare activities. Dinamoni Das,Circle officer,Kalaigaon Revenue Circle,attending the session as the chief guest thanked the members of the organization for their never ending mission of charity. He further said that five thousand years old Indian tradition had always been creating a few social workers like Mahatma Gandhi,Mother Teresa or Bibekananda etc for whose efforts poor and needy people could see rays of hope in their lives.He requested others to follow the path shown by the members of 'Durgat Kalyan Nyas'. The session was also addressed by Sailen Rajbongshi,Binoy Barua,Mahendra Saikia,Sukleswar Deka,Kamala Boro etc.

Spectacular cultural items were also arranged on the occasion headed by Radio artist Renu Saikia to much delight of the people present.

On the other hand five seriously ill patients namely-Sundar Deka,Urmila Deka, Golapi Nath,Karuna Kanta Nath,and Dipamoni Devi sreceived an amount of rupees three thousand each for better treatment. It needs mention that the 'Nyas' had made a profit of rupees two lakhs last year by arranging lottery and cultural programmes.Tarun Azad Deka offered vote of thanks at the end.

21 Mar 2014 - 9:39am | AT News
Security forces seem to have stepped up operation to flush out insurgent elements from Guwahati in the run up to the Lok Sabha polls.Police and CRPF jawans held a NDFB-S militant during a search... 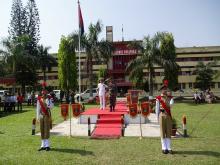 1 May 2017 - 3:45pm | Ranjan K Baruah
Sainik School Goalpara (SSG), one of the pioneering institutes in the North Eastern region, held its Investiture Ceremony in the school premises on 1 May 2017 with military precision to induct new...

22 Apr 2016 - 11:31pm | Drishana Kalita
A group of wildlife photographers and biologists from North East India have reported discovering of a new species of primate to India, the White Cheeked Macaque, in Arunachal Pradesh!Arunachal...