The overall situation in Charaipung is calm on Saturday even as AASU,AJYCP and 10 other organizations have called of the economic blockade imposed against Arunachal Pradesh.The decision was taken a day after acting Assam chief minister Dr Bhumidhar Barman resolved to de

fuse tension as he met Arunachal Pradesh finance minister Setong Sena in Dispur. If normalcy is not restored

AASU and AJYCP would resume the blockade from September 10. Notably, normalcy seems to back to Charaipung and there is no report of any incidents during the last 24 hours. 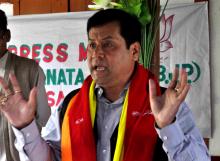 8 May 2013 - 4:08pm | Anup Biswas
Sarbananda Sonowal, BJP State President while strongly criticizing the Congress government and the party appealed to the people of Dima Hasao to support the BJP candidates in the forthcoming election...

6 Dec 2017 - 12:54am | AT News
GUWAHATI:Yet another sensational murder case in Guwahati sends no less shock and anger across the state on Tuesday. The victim is a college girl who was kidnapped by a youth to be killed in his house...

10 Jul 2012 - 11:19pm | Anup Biswas
In a tragic accident, at least three persons died on the spot and two others injured seriously when two mobikes reported to be pulsar involved in head on collision on 54 E National Highway at...