A 15-members joint peace committee between the residents of boder areas of Assam and Nagaland was formed at a public meeting held at Hingibeel Bazar on September 24. The people and representatives of the border areas of Geleky, under Nazira Sub-Division of Sivasagar district and the Tamlu Sub-Division of Lungleng district of Nagaland were present in the meeting. The MLA of Tamlu Legislative Constituency and Parliamentary Secretary of Transport and Communication, Taku Phom was present in this meeting. Decision was taken to maintain peace and harmony among the people of both the states and to solve their problems amicably in conducive atmosphere. Besides everybody stressed to revive the age old tradition of brotherhood among the people of the neighbouring states.

28 May 2010 - 11:48am | sankal
Showing a noble gesture to the society, the All Assam Students Union (AASU) has decided to provide helping hand to those meritorious students, who topped in the recently declared Board exams and...

Udalguri SP suggests use of 303 rifles by villagers

20 Nov 2012 - 7:30am | Jayanta Kumar Das
“At least 45 thousands of 303 series rifles and nearly 10 lakhs rounds of its bullets are lying idle in various police armors in the state with the modernization of Assam police with AK series... 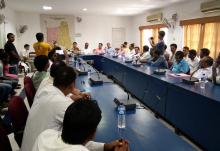 5 Aug 2017 - 9:59pm | AT News
The Central Bureau of Investigation is likely to probe in the sensational killing of amsu student leader in Kokrajhar which runs to in a hail of shock and anger across the state. Dispur has already...