GUWAHATI: At a time when floodwave and erosion continue to ravage Assam, a mute Brahmaputra Board runs with a section of corrupt officials and an “illegaly appointed” officier at its helm of affairs.

Speaking to assamtimes, chairman with Assam Enviro-Legal Protection Society Anjan Goswami alleges that set up to check flood and erosion in the state with as many as 48 projects, the Board now runs without a permanent chairman which is a clear violation of the Section 4 of the Brahmaputra Board Act, 1980.

“We have already knocked at the door of the Gauhati High Court to challenge the appointment of Dr TG Anthony Balan, who was stated to be a retired person.

He was allowed to function as the chairman of the Board without any lawful extension of his service and without the approval of the Appointment Committee of Cabinet (ACC),” says the legal advisor with the NGO legal advisor NH Mazharbhuyan.

According to Mr Majarbhuyan, “after the filing of a case (No 2714/2007) at the Gauhati High Court, Balan was replaced.

“And that too by SK Choudhury, a Shillong-based Chief Engineer of Brahmaputra and Barak Basins under the Central Water Commission by giving him the additional charge of running the board.”

The officials with the NGO maintain that as per the laid down rules, the sitting vice-president of the Board PK Deka should have given the charge in the absence of the chairman which didnot happen, they rue.

Mr Goswami further levels an accusing finger against a section of Board officials saying these people engage contractors from outside and also in several cases , payments are made illegally in advance.

Mr Mazharbhuyan and Mr Goswami say they will leave for New Delhi soon to apprise the Union water resource minister and the as the MPs from the North-east, of the irregularities and functionings that have been puncturing the Board.

4 Jun 2010 - 3:21pm | Mowsam Hazarika
Doordarshan Kendra, Guwahati will starts weekly environmental programme from June 5 to mark the World Environment Day. The duration of the programme will be half an hour. Dr. Krishna Gopal... 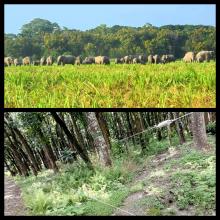 14 Jul 2017 - 6:24pm | AT Staff Reporter
The construction of power fencing  around wild elephant habitats and corridors in and around tea gardens in Udalguri district has been decried by wildlife activists and various organizations....

2 Apr 2012 - 10:42pm | Anup Biswas
To provide relief materials and assistance to the villagers, Dilip Nunisa, Chairman, DHD along with DHD leaders visited Kolaidisa village of Dima Hasao on Sunday where 15 houses were burnt due to...