A citizens meeting has been convened on October 4 to discuss various Burma issues in the city. Organized by the Journalists' Forum, Assam, the meeting will commence from 2 pm at Guwahati Press Club. Mentionable that the recent uprising in the military ruled country that is adjacent to northeast, a number of people (including a Japani photojournalist) were killed. To suppress the pro-democracy campaigners and also the media, the Burmese junta (the present group of Generals is known as State Peace and Development Council) has already taken numerous unethical means, where the military continued massive crackdown on the unarmed monks and the common Burmese with strict restriction on the media. The junta government has already cut the telephone lines of working journalists based in Burma and also slows down the Internet connectivity, such that no legitimate information from the county could reach the outer world. 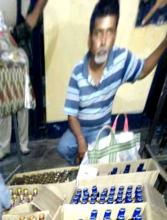 7 May 2017 - 4:08pm | Ranjanjyoti Mahanta
Rupahihaat Police conducted an operation against illegal liquor sellers of the Rupahihaat Bazar and Bhakatgaon area under Rupahihaat Police station of Nagaon district and seized a total of 150 Indian...

1 Feb 2014 - 12:24pm | AT News
Delhi police on Saturday claimed to have caught two youths in connection with the Lajpotnagar incident where goons thrashed an Arunachal Pradesh student to death on Thursday.Sources told Assam Times...

26 Aug 2013 - 8:31pm | AT News
Chief Minister Tarun Gogoi is firm on his stand on the land-swap deal with Bangladesh.Talkin to reporters in Guwahati on Monday, Gogoi said that 665 acre of state land was under the possession of the...