Gandhian Natwar Thakkar appreciates the civil society groups, which render voluntary and self-less service to the society and argues that presence of a strong civil society has enriched the Indian democracy. Attending the ‘Guest of the Month’ program of Guwahati Press Club today (September 2) afternoon, Thakkar even argues that the forum comprising the spirit of voluntary social service should be recognised as the fifth pillar of democracy.

Thakkar, 79, expresses his satisfaction over the service of local media in the country. He declared that the regional and local media in the Northeast has played an important role and many times it has helped the local habitants to get due justice.

Thakkar has great admiration to Anna Hazare and he asserted that Annaji’s movement against corruption has historic importance. The people of the country have found a leader in Anna Hazare to speak for an issue they were expecting for listening and even joining one and all. Thakkar believes that Anna’s fast at Jantar Mantar was itself a successful attempt as he made the entire population aware of corruption and the government also showed interest to resolve the issue. Of course, Thakkar had some reservations on the second phase of fasting at Ramlila Maidan.

Before the interaction starts, members of the press club felicitated Thakkar with the traditional Japi and Gamosa. 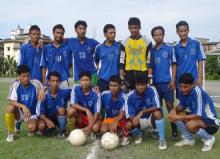 21 Aug 2008 - 10:24pm | Nanda Kirati Dewan
Jewel Star has became champion in the Rajiv Gandhi Memorial Football Tournament defeating Star Sporting by 6-5 goals in a tie-breaker in the final played at the SAI ground, Guwahati on August 20....

31 May 2018 - 6:10pm | Akshaya Pranab Kalita
Namrup: BVFCL Model HS School has stolen the march in the HS examination with cent per cent success drawing huge applause from all fronts on Thursday.Altogether 39 students in the first one batch of...