The United Liberation Front of Asom(ULFA) struck a formal bilateral ceasefire pact with the Centre on Saturday to end the hostilities against each other. The pact was signed during a meeting with the top home ministry officials at North Block in Delhi in presence of Assam government officials.

The second round of talks on Saturday is believed to be a positive one and both ULFA and the government sides agreed to carry forward the peace process.

‘Drihrata’ by Farmaan , a new dimension in Assamese music scenario

3 Jun 2010 - 5:10am | editor
The sound that can melt hearts, the melody that can be felt within & the symphony that can bring a head bangers ball, in short this is what Farmaan can be defined as. Farmaan doesn’t have a... 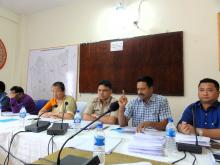 Udalguri administration gears up for Assembly Poll with 95 hypersensitive PS

6 Mar 2016 - 3:33pm | Jayanta Kumar Das
With the announcement of Assembly Poll dates in Assam by Election Commission,Udalguri district administration has been gearing up for smooth conduct of Assembly polls on April 4. As per EC...