ULFA’s Paresh Baruah faction once again makes its strong presence felt in Dibrugarh district on Friday killing a surrendered militant. The anti-talk faction of the outfit shot dead one of their former colleague Tileswar Lahon at sensational shoot out in the evening. The incident took place at Moran where four unidentified youths born in motorcycle shot dead Lahon from a point blank range near his residence near Moran. Lahon fell seriously injured on the ground before the youths vanished from the scene. He was rushed to the Assam Medical College Hospital but was declared brought dead. Police later, recovered an empty cartage from the spot. Hours after the incident, ULFA’s Paresh Baruah faction has owned up the responsibility of the attack. 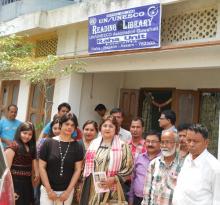 18 Feb 2016 - 7:00pm | Hantigiri Narzary
The Sasastra Seema Bal(SSB) jawans from 16th battalion based at Ranighuli in Kokrajhar district has succeed to got three more achievement with arrests of two drug peddler  and recovery of...