Manas National Park, the centre of tourist’s attraction has opened for the tourists from Saturday. A host of tourists have been waiting to view the natural beauty of this national park which had regain its former glory which was dimmed for some years for the insurgency problem. Each and every year the number of tourist’s migration has been increased. During the year 2010 nov- till oct 2011 a total of 539 foreign tourists and 2798 tourists from our country came from where the national park has been able to collect Rs 146050/- revenue- said Anindya Swargiary, Project Director Manas National park. 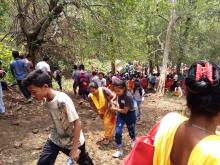 Sea of humanity atop Baukhungri

14 Apr 2018 - 9:17pm | AT News
Kokrajhar: Baukhungri turned into a sea of people where men and women, young and old alike tried to scale the 'Baukhungri Hills’ on the Sankranti,a day before Bwisagu or Bihu celebration across the...

22 Feb 2014 - 5:38pm | AT News
BJP prime ministerial candidate Narendra Modi on Saturday said that the Bangladeshis are posing serious threat to India.In his address at a hug rally in Silchar, Modi said that if he is voted to...