Save rhino campaign on bicycle

Mantu Das, a 30 years old youth of Milan Nagar, Jania Road, Metuakuchi, Barpeta,  son of Late Ghanakanta Das and Nirupama Das set out his journey to Delhi on bicycle, along with his three demands to give to the president of India.

Even after 67 years of India's freedom, there is no railway connection to Barpeta, which is the age old town of Assam. The current status of agri-economy  of the area is very bad. Pride of Assam 'Rhinos' are being killed often by the poachers. Taking all these three problems, Mantu Das has set out his bicycle journey to Delhi to communicate to the President of India - connecting Barpeta with railway system, establish an agricultural industry and to save rhinos.

5 May 2014 - 8:30am | AT News
Simmering tension refuses to die down along the Assam-Arunachal Pradesh border in Sonitpur district. The epicenter is again the Chauldhuwa area in Bihali.A group of IRBN personnel from the...

23 Sep 2014 - 10:30am | AT News
Come September 27. Krishna Kanta Handiqui State Open University is all set to hold its first convocation ceremony. Governor and varsity chancellor J.B. Patnaik will preside over the ceremony of the... 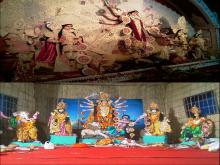 28 Sep 2009 - 6:08pm | Pranjal Saikia
Pune witnessed the Akalbodhan (untimely awakening of Durga), Xarodiya Puja, known by various names this year with lots of fragrance, love and joy. Known mostly as Durga Puja, is celebrated from the...