Over 50 students of a school in Barpeta fell ill after being administered vaccine for Japanese encephalitis on Thursday.
The students of Baghbar ME School were taken ill after they were administered the vaccine and they began feeling unwell soon after.

Then the ill students were taken to Barpeta Medical College Hospital where their condition was stated as stable and there was no reason for concern. 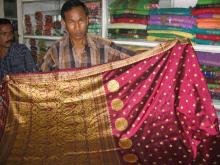 11 Apr 2013 - 1:04pm | Arup Saikia
Rongali Bihu is round the corner and so is the rush of customers in the markets and shopping complexes across the city. The rush of people buying new clothes for them and their loved ones is...

22 Jun 2018 - 10:20pm | Shajid Khan
TANGLA:  In an unique initiative that is bound to restore faith in humanity, a homeless, ailing sexagenarian couple were rescued and nursed back to health by a group of youths at Tangla in...

22 Aug 2014 - 4:14pm | Pramesh Rabha
A 1.5 ft Water Monitor Lizard (varanus salvator) was rescued at Amjuli village under Harisinga P.S. in Udalguri district at about 11am Thursday. The lizard was spotted by a farmer named Atip Daimari...