The four day cricket match between Assam and Orissa in Cooch Behar Trophy (U19) has kicked off today morning at Golaghat Stadium. Assam team led by Wasiqur Rahman, won the toss and decided to bat first. It put up 209 runs on the board losing all their wickets in 68.3 overs. Sasank Negi top scored for his side with a total of 78 runs. The main contributors of bowling first were Suryakant Pradhan who took 3 wickets conceding 39 runs and Priyotosh Parmanik who took 3 wickets conceding 47 runs. In reply Orissa scored 57 runs losing 3 wickets at the end of today’s play. In bowling Amlan Jyoti Barua took 2 wickets and Jogeswar Bhumij took 1 wicket for Assam. Orissa team is being led by Sachdev Patra. 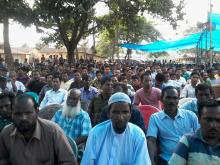 10 Oct 2015 - 6:30pm | Hantigiri Narzary
BPF supremo Hagrama Mohilary on Saturday openly and closely talked to the partymen at the grassroot level in two places in BTAD areas and asked them to strengthen the party ahead of the Assam...

10 Apr 2010 - 1:24pm | manojpandey
The Army in a colourful ceremony yesterday dedicated a computer laboratory to Rangsangigaon High School of Dibrugarh district. Undertaken by the DAH Division under the aegis and execution of 18 JAT...

24 Aug 2008 - 6:39pm | Ranjan K Baruah
Peoples Rights Forum (PRF) Assam a forum of NGOs, individuals and peoples organisation had decided to work for the food security in the state of Assam. The first executive meeting of the forum was...