Curtains came down on the 1st Guwahati International Music Festival (GIMF) last week amidst scintillating performances by top artists from various parts of the globe. The two day festival, which was participated by 33 top artistes from different parts of the country as also abroad, had been a resounding success, with a number of musicians, students and music lovers attending the various events.

GIMF 2011 had been conceptualised to fill the need for a premier music festival in the country which can showcase the best of regional, national and international talents in the music field to the people of the region. Besides serving as a platform for interaction among musicians, music professionals, music lovers, music trade firms and music institutes, the festival was also organized to initiate cross-cultural dialogue among people and artistes of the region with those from others parts of the country and the world. The event was conceptualised, planned and implemented by Aiyushman Dutta.

The festivities began on December 2 when Tangkhul Naga folk balladeer organized a unique music workshop-cum-lecture demonstration for music lovers and school students of Guwahati. Guru Rewben Mashangva, a wandering minstrel from the hills of Ukhrul in Manipur, has earned international acclaim for his pioneering work in preserving and promoting Tangkhul folk tunes amongst the youth. Having refashioned tribal music instruments to suit the western tonal scale, he has developed his own brand of Hao music.

Hundreds of students attended the seminar to see Guru Rewben display his traditional instruments and the need to preserve the old folk traditions. Talking about his interaction with the elders of his village and displaying his traditional instruments, he kept the audience spellbound. The event was inaugurated by Assam Chief Information Commissioner and chairman of the core committee of the festival Deepak Narayan Dutt.

A 13-member cultural troupe of Goa performed the Goanese Mando Mogi and the Portugese Coredinho, ensuring that the cultural quotient was kept running throughout. The performance of the Goanese troupe was facilitated by the Directorate of Art and Culture, Government of Goa.

The Guwahati International Music Festival was spread across three indoor pavilions, an open-air stage, an indoor auditorium and a food court dealing in ethnic food items of the region. While live music performances were held in the open-air venue, the auditoriums and pavilions were used for the lecture-demonstration sessions, film screening event, display kiosks for professionals and firms from the music trade industry.

Among the visiting music trade industry professionals, mention can be made of Abe Thomas. The Indian representative of Musicians Institute in Hollywood, he also represented Suzuki Music Instruments Co Ltd (Japan), music journalist Colin Savio Coelho, Sonia Mazumdar of Muzickonnect and Earth Sync, Deepika Bagaria of Artist Aloud, amongst others. Many musicians of the city were seen interacting with these veteran trade professionals and learning about the latest trends and developments in the global music industry.

The first evening, which was dedicated to classical music, was inaugurated by musicologists Somnath Bora Ojha and Dr Prassana Gogoi. Mumbai-based vocalist Abhishruti Bezbaruah began the proceedings of the evening which was graced by virtuoso Sitarist Pt Manilal Nag. The mother-daughter duo of Minoti Khaund and Sunita Bhuyan, Tarun Kalita, Moitryee Goswami, Pawan Bordoloi were some of the other performers of the evening.

The second day began with an impromptu jamming session by UK based Rajarshi Siddhartha Chowdhury, Samyami Sangeeta Chowdhury with Guru Rewben Mashangva from Ukhrul, Edwin Fernandez from Delhi and Daniel Engti of Karbi Anglong. The brother and sister duo from UK mesmerised the audience with their performance of lokageet and borgeet. Rajarshi is a lawyer by profession and Samyami is a doctor but their passion for classical and Assamese folk songs brings them to their home State every year. Their jamming session was an interesting fusion of classical and Assamese folk with Blues and Jazz, Karbi folk music and Tangkhul folk music.

Later a number of films on music were screened at a film camp. The films that were screened included Songlines by Vasudha Joshi, Mystical Grass by Pritish Chakraborty and Puja Chakraborty and Songs of Mashangva by Oinam Doren, amongst others. Over hundred students, musicians and people from all walks of life attended the workshop and the film camp.

The evening performance of the second day began with a piano solo performance by Ronojit Chaliha. Playing some popular compositions by Bach and Neil Nongkynrih, young Ronojit aptly set the mood for the evening to come. As the crowd trickled in, the Kolkata-Guwahati-based fusion project Naad Brahma came on stage. This classical and Blues ensemble ensured that Guwahatians got a taste of some new innovations in the fiels of music.

But it was UK-based harmonica specialist Brendan Power who took the honours. Playing a different set of scales on different harmonicas, he aptly demonstrated the immense possibilities of the Blues harp and at the same time, took the audience to an altogether different world during his hour-long performance.

Popular contemporary Assamese singers Mayukh Hazarika and Laili Dutta Hazarika were up next. In their 45-minute long performance, the duo gave a fitting tribute to their uncle – the greant unparalleled balladeer late Dr Bhupen Hazarika. Their performance was marked by a formal address by late Dr. Hazarika’s long time companion and filmmaker Kalpana Lajmi. During the ceremony, Secretary to Assam Government, Cultural Affairs department also formally handed over the Eastern Beats Excellence in Music award to Guru Rewben Mashangva.

Nepal’s rock diva Abhaya Subba and the famed Steam Injuns followed up next, much to the delight of the hundred-member strong Gorkha community and rock lovers that had descended at Shilpgram. Though the slight drizzle threatened a premature end to the performance, the rockers lived up to the spirit and rocked all those present. Lucid Recess from Guwahati also performed on the occasion. 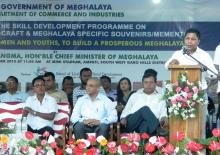 12 Jul 2013 - 10:27pm | Ripunjoy Das
Following the Siksha Ka Haq Abhiyan flagged off by his Excellency the Governor of Arunachal Pradesh on June 8, the SSA District Unit, Tirap has started the Awareness Campaign and 3-days training for...