Talking to reporters in the sidelights of a function in Guwahati, Gogoi said that such a big demonstration in the form of road blockade was not possible for KMSS to organize without the active help and support from Maoists and ULFA.

He said that the government keeps its door open to discuss anything with protestors. But in the same breath he said he wont allow anybody to take law on their own hands. “My position is clear. If one takes law on one’s hand we not remain silent.” 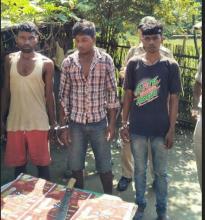 23 Aug 2017 - 10:59pm | AT Kokrajhar Bureau
The Kokrajhar police arrested three people accusing them of killing   Thomas Tirki of Dholmara Salakati on August 20, 2017.  They were arrested under case register with...

25 Mar 2018 - 8:29pm | AT News
Kokrajhar, Mar 25: An unidentified  body  strikes no less sensation in Kokrajhar after it was recovered at Chakrashila forest area in Choraikola in on Sunday.According to police, local...