All must be united to deport foreign nationals : Assamese Muslim body

The indigenous Assamese Muslim students' community here in Nagaon have demanded detection and deportation of all illegal migrants not only from Bangladesh but also from other countries, who came to Assam after March 25,1971.

The students' community also appealed to all the political parties, organisations and all sections of people of the state including the Muslims to come forward to press the Governments, both the state and the central, to take firm steps to drive out all foreign nationals in the greater interest of the State and its people, irrespective of religion, language and community.

The community opined that unabated influx of foreign nationals has been making the situation in the state critical and constituting a threat to state's security for a long time.

The students' community further revealed that if the government failed to take effective measures to stop the flow of immigrants and drive the foreign nationals out of the State, then Assam would very soon turn into a New Bangladesh.

4 Feb 2012 - 5:46am | Anup Arandhara
A case of gang rape of a newly married woman is registered at Sonari police station of Sivasagar district . According to police, the victim, a labour of Joboka T.E. was gang raped by six...

3 Jun 2015 - 6:12pm | AT News
The Haryana police have arrested yet another person from Haryana for procuring three girls from Assam through a middlemen who have been earlier caught in this connection.Sources told Assam Times that... 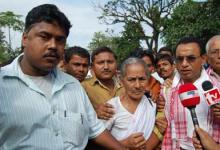 23 Jul 2008 - 9:34pm | swapan
In a crucial turn around, Top United Liberation Front of Assam leader Prabal Neog alias Benudhar Bora has been released from the Dibrugarh Central Jail this afternoon. At the time of release UFA...
Follow @Assam Times