The Man of the Match title and Man of the series are awarded to Manuj Sarma of Pragoti Club Jorhat and Kaku of Nazira team respectively. 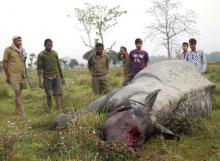 23 Mar 2014 - 12:43pm | AT News
Poachers have killed yet another rhino in Kaziranga to take away its horn.The hornless carcass was found in Kohora range of the national park on Sunday morning.Forest guard spotted the carcass hours...