Deal with draught: Gogoi to ministers

Chief Minister Tarun Gogoi Gogoi asked his ministers and officials to prepare district-level plans to deal with the draught-like situation in the state.

The instruction came up when Gogoi held a meeting of senior members of his ministry to deal with the drought-like situation in Assam. He stressed the need for taking water conservation efforts in all commercial and residential areas in view of the lack of proper rainfall.

22 Dec 2017 - 4:09pm | AT New Delhi
NEW DELHI: The Supreme court has asked the Assam Government to file an affidavit on the bail petition moved by Rakesh Paul whom police arrested in a new case after he procured bail from the earlier... 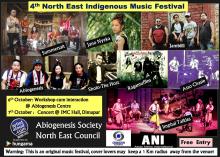 12 Jun 2018 - 5:16pm | Prantik Deka
Shankar Borua is an independent filmmaker from Assam who has continued making cinema with a distinct sensibility and incorporates the voices of the many communities that make up the State. Even...