Addressing the reporters here, the AGP leaders say the panel in ites report has not clearly mentioned his name in connection with the Parameswar Kalita murder case and therefore he is free of any charges.

“Moreover whatever I said before the panel during the time of my deposition was not recorded.”

Meanwhile, hundreds of people from Hajo came out to the streets on Monday demanding action against the legislators saying him a secret killer.

They say they need not a killer to represent them from hajo.

They further sent a memorandum to the Chief Minister seeking action against them.

Cyclist run over by truck 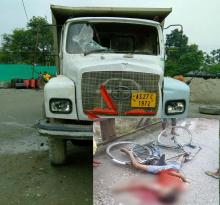 24 Oct 2017 - 10:44pm | Shajid Khan
A cyclist was run over by a speeding stone carrying dumper (AS 27 C 1972)on Mangaldai-Bhutiachang road near Garuajhar under Panery PS in Udalguri district on Tuesday morning.The deceased was...
Follow @Assam Times