The owner and pilot of the double-decker ferry that capsized on April 30 in the Bramhaputra river in Assam's Dhubri district have been arrested as one more body was recovered on Tuesday. Owner of the ferry Syed Ali Bepari and pilot Golabuddin, ticket checker Syed ur Rahman and helper Shah Alam Sheikh have been arrested on the charge of plying the ferry after expiry of its licence.

Meanwhile, with search continuing since the mishap, one more body was fished out today, taking the official count of bodies recovered so far to 40. The body was found from Patakata, downstream from the accident site, and close to Indo-Bangladesh border. 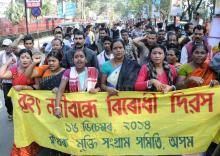 16 Dec 2014 - 12:20pm | AT News
The Krushak Mukti Sangram Samity on Tuesday hit the streets across the state in protest against the Lower Subansiri Hydroelectric Power project at Gerukamukh along the Assam-Arunachal Pradesh border....

22 Jan 2016 - 7:33pm | AT News
Two day consultative workshop to understand perspectives on youth development in North East India has been concluded at Don Bosco Institute. This workshop has been organised by Quest Alliance and...