Man proposes but god disposes - the tragic story of Poulomi

The tragedy of Poulomi Kashyap proves the saying like no other. Poulomi a brilliant student of Salt Brook Academy in Dibrugarh and an examinee of Higher Secondary School Leaving Certificate examination. Poulomi was born on June 26, 1993. She passed HSLC examination with distinction in the year 2010 from Little Flower School, Dibrugarh. A pall of gloom descended in Golaghat, her ancestral place and Dibrugarh when the H.S. results are declared today with Poulomi securing 82% with letter marks in all the subjects but she was not there to partake in the jubilation.

The cruel snares of death had taken Polulomi far away from her family and friends along with her father. It was on May 17 when Poulomi was returning to Dibrugarh from Guwahati along with her family after appearing in the entrance examination of integrated M.Sc in psychology of Sikkim Central University when a massive collision of their vehicle with a dumper near Bokakhat took away two precious lifes, of Poulomi and her father Barun Hazarika, a Development Officer of LICI Dibrugarh. She had always nurtured a dream to be a psychologist and the good news was that she secured 4th rank in the entrance examination Poulomi’s mother Mintu Moni Hazarika and her little brother Tathagata (7) are still undergoing treatment at Jorhat Medical College Hospital and wish them a speedy recovery. All we can say to Poulomi is congratulation and may your soul rest in peace.

Permalink Submitted by Dhruba on Wed, 06/06/2012 - 03:26
Poulomi and Borun. You r at rest now. U achieved higher attainment than some absurd(!) ranks in this materialistic world. Yes u left a void. That's only too eminent with this results. May ur souls attain liberation.

Paranjoy Guha Thakurta will attend Guest of the Month program

21 Jul 2012 - 1:09pm | editor
A daylong media orientation program with an aim for encouraging and developing ethical journalism has been organized on Thursday (July 26, 2012) at Guwahati Press Club. Paranjoy Guha Thakurta, an... 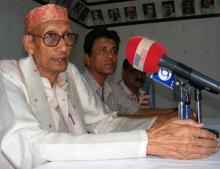 21 May 2008 - 1:00am | editor
Mired in umpteen numbers of allegations of corruption, Assam Sahitya Sabha president Kanaksen Deka said a section people has been trying to tarnish the image of the literary organization by spreading...