With a large number of citizens from the North-East come to Delhi-NCR for education and jobs. The rising unpleasant incident of racial discrimination and verbal abuse against citizens makes impossible to live here in Delhi-NCR. North-East have forced the Ministry of Home Affairs (MHA) to send a letter to all the states and Union Territories, asking them to book offenders guilty of atrocity against people from the region under the Scheduled Castes and Scheduled Tribes (Prevention of Atrocities) Act since a significant number of persons from the North-East belong to the Scheduled Tribes. Finally it’s decided that next time when any one decide to call North-Eastern a `Chinki`, you could end up unruffled your heels behind bars for the next five years.

The law states, “An offender can end up spending five years in jail and the accused could be denied anticipatory bail as well. And in case the police fail to act on a complaint, he/ she could be imprisoned for a term which should not be less than six months and may be extended to a year.”

It is reported to the Ministry of Home Affairs that people originating from these North-Eastern states do face abuse in major cities and feel insecure. They are facing unfairness as they are addressed with insulting adjectives or face bias in the form of targeted attacks, assault, molestation and other atrocities. Also it is reported that if the complainant from the North-East is a member of the Scheduled Tribes, then the provision of Section 4 of the SC/ ST Act should be call upon.

The Ministry of Home Affairs guesses that most North-East persons in major cities belong to the ST category. According to a provision under Section 3 of the SC/ ST Act, an offence will be committed if any member of the SC/ ST category is “deliberately insulted and humiliated in public view.” 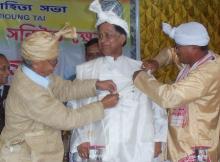 10 Sep 2013 - 6:30pm | AT News
The mortal remains Timothy Sinha and Naruttam Deuri are arriving in their homes on Wednesday.The bodies will be accorded a guard of honour at the INS Ashwini at Colaba in Mumbai on...

18 Mar 2013 - 10:24am | AT News
Two persons died when a vegetable boat met with a tragic mishap on the river Brahmaputra in Kamrup district on Sunday.It took place in the afternoon when the boat was on its way from Rani Chapori to...