Assam Chief Minister Tarun Gogoi has condemned the Mumbai violence and asked people to maintain calm. Talking to reporters in Guwahati after the violent protest in Mumbai, she talked his Maharashtra counterpart to ensure safety of the Assamese people in the state. The protesters suddenly turned violent and torched a media vehicle and damaged buses. They also pelted stones forcing police to open fire in the air and resorted to a lathi-charge to disperse the mob. 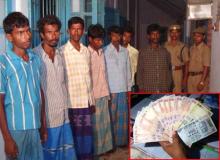 5 Jul 2016 - 6:25pm | Shajid Khan
Nirmal Ghosh of Mangaldai was one of the sucessfull candidates in the recntly declared APSC results. He is selected for the Assam Police Service. He is the lone son of Nitai Ghosh and Alka Ghosh a...

23 Jun 2011 - 9:51pm | editor
The Assam government has ordered a probe into the Wednesday’s police firing in Dispur where 3 people including a minor boy died. According to information, additional chief secretary Surajit...