A good number of students, researcher and scientists from the northeastern part of the country engaged in different fields, acquired tremendous achievements in foreign countries. Very recently an Assamese scientist working in USA, has shown a new path that can help cure any viral disease like influenza, herpes or HIV. Dr. Ankoor Roy and his colleagues’ achievement has been recognized worldwide by Structure, a prestigious scientific journal.

In an interview Dr. Roy said they used P22 bacteriophage as a model system for the research. The researcher and his team have identified small protein which plays a critical role in identifying its own DNA and pumps its own DNA to form a new virus particle inside the host cell. Structure solved by them will help to design drugs against herpes and HIV virus as they also have the same mechanism and protein. This will ultimately help to stop the recognition event of its own DNA and multiplication the virus particles inside the host. It is to be mentioned that understanding the viral life cycle is very important to develop drugs against them. Till now there is no cure for any viral disease, like influenza, herpes or HIV. Most of the studies are directed towards understanding the life-cycle of virus.

Dr. Roy who graduated from Gauhati University and is now working in Department of Biotechnology and Molecular Biology at Thomas Jefferson University in Philadelphia says both bacteria and viruses are very small, but bacteria, given the proper nutrients, can grow and produce on their own. Viruses cannot “live” or reproduce without getting inside some living cell, whether it’s a plant, animal, or bacteria. Bacteriophage is virus that looks like an alien landing pod. With its six legs, the bacteriophage attaches to the surface of the much larger bacteria Escherichia coli (E. coli). Once attached, the bacterophage injects DNA into bacterium. The DNA instructs the bacterium to produce masses of new viruses and so many are produced that the E. coli bursts. Because of the similarities between bacteriophage and animal cell viruses, bacteriophage (P22) is viewed as a model system, Roy said. Dr.Roy is the only son of Mr. Hemendra Kumar Roy and Mrs. Tarudevi Roy residing at Shantipur (Guwahati) in the state of Assam, India. His wife Dr. Monalisa Majumdar is a Research Engineer at L. G. IRIS in USA and co-incidentally the protein structure illustrated by Mrs Majumdar takes place on the cover page of the journal “STRUCURE”..

The team used a bottom up approach where they identified and determined the structure of a small protein crystallography, which is responsible for identifying its own DNA from the pool of bacterial DNA. This work is very significant from the point of understanding the biology of virus and deigning drugs against it.

3 Nov 2016 - 5:52pm | AT News
The acclaimed GNRC hospital will conduct the next ‘Evening with a Doctor’ program on Saturday for the benefit of Guwahati Press Club (GPC) members along with their close relatives. The free... 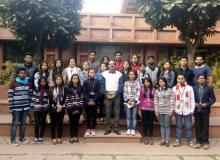 12 Dec 2015 - 3:27pm | CM Paul
A group of MSW students from Assam Don Bosco University, Guwahati, Assam, under the leadership of Dr Luckose Jacob Associate Professor of Social Work in the School of Social Sciences  on a Study...
Follow @Assam Times