Atleast 20 people have been injured when ULFA exploded a powerful grenade in Tinsukia. The incident took place at 7 in the evening in Doomdoma where ULFA militants lobbed the powerful grenade at a police outpost which exploded with a huge sound. Twenty people injured on the spot who were rushed to the hospital. 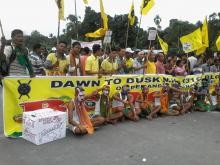 14 Oct 2015 - 10:26am | Hantigiri Narzary
The demand for separate state of Bodoland, has again got a gained today as tens of thousands of supporters and common publics thronged along the 31C National Highways at Ramfalbil in Kokrajhar...

15 Jun 2017 - 9:36am | AT News
Under the joint initiative of Batadrava Police and it's VDP wing, a felicitation programme was organized in the auditorium of Sati Radhika Girls' High School on Wednesday where 60 meritorious...

5 Feb 2008 - 1:46pm | editor
The face of violence atop the North Cachar hills refuses to die down. The Black Widow militants have killed one more people after he was kidnapped from Haflong town on Sunday. According to...