A protest meeting organised by Journalists’ Protection Committee Assam at Guwahati Press Club today urged the authority to nab the culprits involved in the assassination of Raihanul Naium, a reporter of Gana Chabuk, in Dhubri on September 8 evening. The meeting also resolved to organise a State wide protest demonstration on September 16 next. Various speakers in the meeting also expressed their concern at the conspiracy, hatched by some anti-social elements to divide the journalist community of Assam on religious bases, and appealed every one to remain alert against such forces.

Temple to be unveiled in Hojai

4 Nov 2017 - 1:41pm | Nikhil Mundra
Babosaha Commando Force Delhi and Babosaha Bhakat Mandal Guwahati are unveiling 13 Durga temples in different parts of the North-East region from Sunday. In Hojai, the temple is going to be...

18 Nov 2011 - 4:54am | Jayanta Kumar Das
The Kargil Gunners of the Red Horns Division based at Udalguri organized a unique 'Career Mela' for student community at Dimakuchi College on November 17. The aim of the 'Career Mela' was to educate... 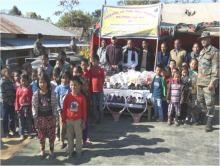