A 18 member gang of poachers who have been behind the killing of least ten rhinos in Kaziranga National Park over the past three years have been arrested.
The gang leader Lyngdoh Rongpi was arrested from Jamelangshu hills on Monday night and based on his interrogation his accomplices were netted at a village in Bokolia.
According to information, two forest employees were also held on suspicion of killing the one-horned pachyderm.
An AK-47 rifle, 37 rounds of ammunition, two 303 rifles and one gun were seized from them. 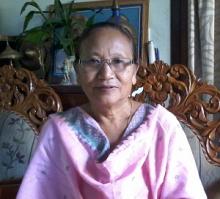 15 Oct 2015 - 9:46pm | Hantigiri Narzary
Former minister Pramila Rani Brahma has demanded strong security cover up along with suited arms like AK 47 with PSO attached to her in her position, otherwise she would withdraw her securities by...

8 Mar 2008 - 7:30am | editor
A NABARD sponsored micro enterprise development programme is under way at Solmora village under Dhekorgorah block, Jorhat. The 10-day programme has been supported by agriculture-based NGO Pathar. As...