Congress may retain power in the panchayat election at Sivasagar District

Despite the raising complaints of corruption & allegation against the rulling Congress (I) party, they may still capture the power in the ensuing panchayat election at Sivasagar District. Opposition parties have failed to create an anti-incumbency wave and to stand a common candidates against the congress candidates. Ddivision of votes among opposition will help Congress. 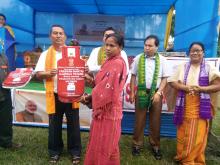 20 Apr 2018 - 10:10pm | AT Kokrajhar Bureau
Kokrajhar:  The Ujjwala Divos was celebrated in Kokrajhar along with rest of the state under Gram Swaraj Abhijan.Women beneficiaries were given away LPG sets on the occasion at free of costs to...

29 Jul 2015 - 8:16am | AT News
The Assam Public Service Commission will accept the applications for ACS ((preliminary) examination till August 1.According to a notification, the candidates would be able to submit the applications...

6 Apr 2017 - 1:25pm | AT Staff Reporter
The Udalguri district committee of All Bodo Students Union (ABSU) and All Bodo Women Welfare Federation (ABWWF) in a joint petition to Narendra Modi,Prime Minister of India demand judicial inquiry in...