Journalism profession in a puzzle box

A sad and pathatic picture of media house workers reflected in Sakalbela's office, when workers including reporters of the Bengali daily had to strike due to non-payment of salary for the last two months. The paitence broke when administrative officials went underground today at a time when employees were promised for their dues. Also the Rongali Bihu celebration added to the woos of the employees. The media boom in Guwahati, now saw the real face of what media boom is all about, the sallow development was even praised by Chief Minister Tarun Gogoi, tagging it as a result allround development in the state.

This is not the first incident in the country when employees had to strike for nonpayment of salaries, be it in government sector or in private sector. In recent times Kingfisher Airlenes made headlines for nonpayment of salaries to the employees, or take the instance of Assam State Transport Corporation before it got a facelift. There are many such instences. But this media issue can no way be campared with the references given already. The media boom in the Assam is very new and is in infant stage and thus has to be bottle feeded from time to time with changing hands. This crisis is not natural but instead artificial created by foul players causing professional hazzards. However natural causes are more transparent and thus acceptable and can be excused too. Are media house owners responsible enough and do they have social obligations in their mindset while going for starting a media house? Is it a fashion to own a media house? These questions are perhaps put by fools. 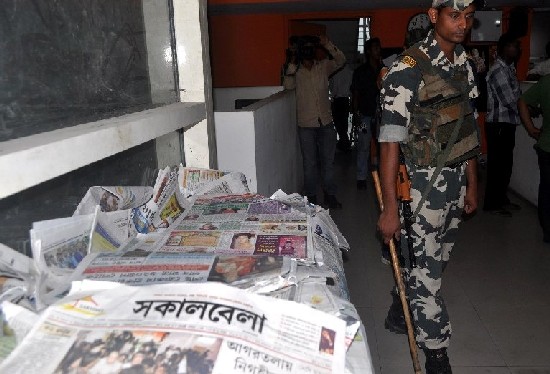 Coming to the media boom issue in Assam, the million dollar question is about its sustainability, who are taking over the media houses, what motives behind taking over media houses, setting up of more and more media houses which cannot be justified as media boom. Is there enough scope for so much of media houses in terms of earning revenue and paying the minimum healthy salary to the employees, or even following the wage board guidelines? Its like a house built with roof but without walls to protect. For many, a house with a roof will be enough for some time at the begining, but in the long run things will not last or sustain. Its time to watch and be careful as who are taking over the media, how healthy media are we having around us, or does it mean only business at any cost.

There is no denying that any body can own a media house and invest capital. Why on earth chit fund companies collecting huge amount of money and investing in media that also works as a medium for PR for the same company. Are not the chit fund companies collecting money illegealy and going underground so easily and the government is helplessly watching? And so, what can we do - refusing to join a media house if the organisation's credibility is in doubt.

People in general still takes media profession as very vulnerable and perhaps this is the state of affair here. How long can journalism passion remain pure and encouraging unless minimum security is not ensured. The fourth pillar of the country is of course not made of concrete as it might look for some. “I have seen enormous changes. I have not seen enough changes. I, too, can hardly wait.” ― Kay Mills.

Once an elderly man laughed at me when I said that I wanted to be a journalist.

17 Jul 2016 - 4:34pm | CM Paul
A nano technology scientist from Assam on a summer tour of five top American universities has garnered interest of the scientific community and harnessed support for research projects as well as...

19 Oct 2017 - 6:25pm | Nikhil Mundra
Dipawali is back with millions of lamps illuminating Assam in the darkness of night along with other parts of the country on Thursday.  Despite administrative restrictions sounds of...