There is no height of imagination for artists, all are artists in their own right. However there are exceptional people who like to do things in an exceptional way, share the idea with others and allowing interpretation at the same time. The “AMPHIBIAN” a boat conceptualised by artist, cultural researcher and creative director, Indrani Baruah that sailed in the Brahamaputra gave immense pleasure to the onlookers and inquisitiveness to learn about the boat that cruised from Uzanbazar Ghat to Sualkuchi with 32 people on board. However the journey for all must have been the slowest journey ever taken in their life till date. The raft travelled along the water was hardly one-kilometer-per-hour, and it took almost six hours to reach Sualkuchi form the start.

The design of the boat is all about re-imagining culture by the artist herself. The boat is based on the structure of “MELENG” (Bamboo rafts, that are in used in River Brahamaputra ferrying tons of Bamboos for selling,tied together forming a raft structure that moves on the river with the flow) The ”Amphibian” is also made using all bamboo and a finely designed bamboo structure above, while using thermocol at the base to help the boat float. The concept of totally using natural products is sending the message of environmental safety, no use of fossil fuel related to it . For those the people traditionally ferrying bamboos using a raft like structure has played a great role to the contribution of environment safety that has inspired Indrani Baruah. The designed raft took almost two months to get to the proper shape, design, and a trial before making the final journey from Guwahati to Sualkuchi on 21st April. The entire Project is supported by India Foundation for the Arts (IFA) Bangalore. 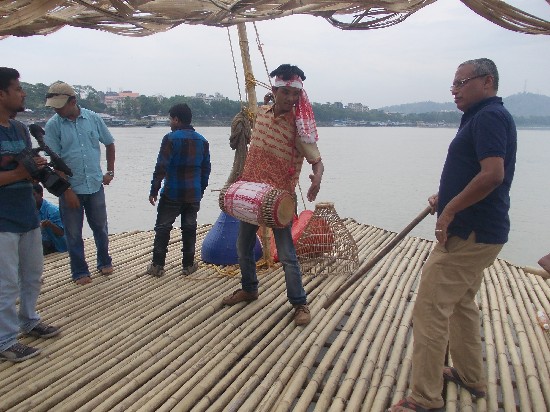 “I am an artist, I do not define myself in terms of gender” Says Indrani Baruah, when asked about her comfort to work with men folks. This encouraging lines are enough to boost the morale of women folk working in their own fields of interests. 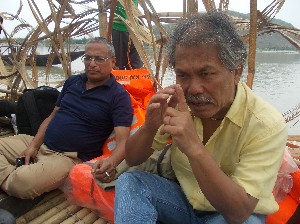 While on journey various artists perforemd music, dance, besides discussions on the environment and preserving River Brahamaputra, and exchanging personal views about the changing environemtel scenario. Ask Budi Thapa, about the unique journey, “ The journey is wonderful, Peace, harmony should always be the message of the artists.”says the veteran artist from Kohima.

Cultural Re-imaginations is a series of interventions conceived as an ongoing experiment in challenging the traditional boundaries between art and architecture, artist and artisan, crafts and arts and towards developing a new, critically engaged hybrid practice that integrates cultural history, architectural traditions and current environmental concerns of the northeast India and beyond, along with creating provocative art that leads to unanticipated interdisciplinary convergence.The imminent shortages of land, water and energy continue to increase the pressure to find innovative solutions, especially in communities that live in close proximity to the natural environment. Employing a raft structure and a series of 'unscripted' performative journeys on one of Asia's major rivers – The Brahmaputra.

"Cultural Re-imaginations II" (2nd part) will explore creative approaches with which communities can coexist with natural environments. During Cultural Re- imaginations II, a floating-habitable raft (Amphibian) has been developed based on the sustainable principles of the itinerant vernacular bamboo rafts (melengs) used in this region on the river Brahmaputra. This is a latent, but extraordinary mode of transporting bamboo all year round by indigenous communities on the river Brahmaputra by using only the power of the river. The new experimental raft has been conceptualized as a potential 'sustainable habitat' that can be anchored like a boat or a ferry. The construction of the raft structure involved collaborative work between bamboo artisans, boat-builders, raft workers and artists.This cultural intervention is intentionally ephemeral and is intended to evoke universal, temporary, mobile, vernacular habitats with minimal environmental impacts as well as cultural forms inherent to this region.

Beef politics to divert other issues!

19 Oct 2015 - 6:44pm | AT News
Assam chief minister Tarun Gogoi seems to have stepped up attacks on the NDA government at the Centre taking up one after another issues confronting the country. Now he accused the BJP-led...

19 May 2008 - 2:18pm | editor
One Dilip Kalita, arrested after charging with duping a landowner has been remanded to judicial custody on Sunday by the Kamrup district session court. The accused has admitted that he has been...
Follow @Assam Times