Application for artiste pension before June 25

The Assam Government will offer Artiste Pension to persons having outstanding contributions in the field of art and culture in the State. Special Family Pension will also be offered to indigent families of persons who were already awarded Artist Pension but unfortunately passed away.

Applicants attaining 60 years of age and above may apply in the prescribed format available in the Cultural Centres and submit to the concerned Officer-in-Charge of Cultural Centres in the districts and sub-divisions on or before June 25, 2013.

Where the Cultural Centre does not exist, applicants can send it directly to the Office of the Director of Cultural Affairs, Assam, Rabindra Bhawan, Guwahati – 781001.

Forms are available in the Office of the Officer-in-Charge, Cultural Centres under Directorate of Cultural Affairs, Assam in various districts and sub-divisions of Assam.

27 Feb 2014 - 12:15pm | AT News
Curfew has been clamped in parts of Udalguri district to douse the simmering tension on Thursday.Army flag march is in progress in Kolaigaona and Udamari areas following a group clash that left at... 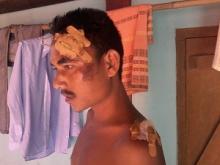 Two injured on mishap in Kokrajhar

22 Apr 2008 - 3:02am | editor
Altogether five people died and ten others have been injured when a Tezpur bound bus collided its head on a moving truck near Roha in Nagaon district today.According to information, the accident took...