Delhi police have arrested three youths in connection with the Nido Tania murder case apart from identifying 6 others hours after the Delhi High Court asked for reports from the Centre and the Delhi Government by Wednesday.

Delhi police sources told Assam Times that the arrestees include the six persons they have already identified. Two of the elusive miscreants are juvenile.

Tania, the student from Arunachal Pradesh was killed at an attack by goons in Lajpotnagar area on Thursday last resulting in simmering protest in the capital.

The post-mortem report has said that he died due to swelling in his brain and collection of fluid in his lungs.

On Monday, Congress Vice-President met delegations of students and leaders from the Northeast, assuring them justice.

Delhi Chief Minister Arvind Kejriwal is set to meet them at Jantar Mantar on Tuesday. The protesters are also likely to meet Home Minister Sushil Kumar Shinde seeking steps to ensure their safety and security.

17 Sep 2015 - 5:41pm | AT News
Amid an uneasy calm, Churachandpur women thronged in thousands at a local payground on Thursday mounting the pressure on the government to create separate administration for the hills tribe area of...

31 Mar 2014 - 1:42pm | AT News
Gujarat Chief Minister Narendra Modi on Monday strongly criticized his Assam counterpart for failing to efficiently deal with the law and order situation in the state.In his address at a poll rally... 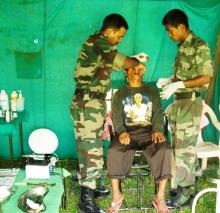