Akhil to be produced in court

Police are all set to produce Akhil Gogoi seeking more remand in a string of fresh cases pending against the KMSS president.

Sources told Assam Times that Gogoi along with two others would be produce before the CJM court at 3 in the afternoon. The 24 hour custody in connection with the self immolation cases would expire on Friday evening.

The Kamrup additional chief judicial magistrate extended the police remand by a day after the KMSS president along with three of his associates were produced before the court on Thursday adfternoon.

After medical check up, Gogoi along with his associates would be produced before the court on Friday.

Earlier, they others were produced in the court amid tight security in the court premises four days after they were arrested in connection with the recent self immolation cases

19 Aug 2012 - 3:18am | editor
Karnataka police arrested three more persons on Saturday for spreading rumours about attacks on north east people. This has taken the total number of those detained in this connection so far to 16.... 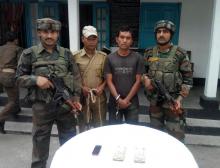 30 Apr 2016 - 7:44pm | AT Kokrajhar Bureau
Security forces apprehended a link man/over ground worker of NDFB-S militant outfit from Guruphela area under Kachugaon PS in Kokrajhar on Saturday. Based on an input about presence of militant...

20 Feb 2008 - 4:32am | editor
Assam Chief Minister Tarun Gogoi is leaving for Tripura on Wednesday to campaign for the upcoming Assembly polls slated for February 23. According to information, Mr Gogoi is schedule to address poll...