Health Minister Dr. Himant Biswa Sarma is reported to have said in a statement that the Hindi speaking people coming from the different states and living in Assam would also be tried under the Assam Accord to see if they had any right to vote to elect the peoples’ representatives from the state in any election. The BJP leader Mrs Bijoya Chakravarty reacting to the statement made by Mr. Sarma said that under the constitution of the country every Indian citizen had the right to live any part of the country where ever he or she liked to. The Hindi Speaking people who came to Assam in the search of their bread can not be denied their right to vote under any accord whats of Assam Accord as it is their constitutional right, Mrs Chakravarty added. The BJP leader calling the statement a motivated move of the Congress said that if the state Government would proceed with the view of Mr Sarma the BJP would strongly oppose the move and resort to agitation at both state and national level.

Permalink Submitted by Satyen on Tue, 12/08/2008 - 02:22
Hindi speaking people should not be deprived of voting rights in Assam and North-East India. But, they should not be given Land Rights. Just take the example of towns like Tinisukia in Assam....they have become virtual mini Bihars and Rajasthans.

Permalink Submitted by Kokaideu on Wed, 13/08/2008 - 02:23
What is the argument for not giving Land Rights to Biharis or any other Indian? Don't Indians have a right to settle down and purchase land and property anywhere in India (except Kashmir and Meghalaya, which I don't understand also)? There is something very wrong with the Indian democracy and how it is practiced. The illegal immigration problem is the responsibility of Delhi, and it needs to solve it by force if necessary. But to state that people from other places of India cannot settle down in Assam is short sighted and not really democratic. How about all the Assamese settled down in Bangalore, Delhi, Chennai and even abroad? Do you want them to be driven out too? What you suggest is only possible if Assam is independent. So you have to make a choice. Have your own country and then you can dictate your own rules. Today Bihari, tomorrow it may be Borpetia, or Nalbaria or Jorhatia. This theme does not stop.

Strategies on to counter ULFA

5 Aug 2012 - 3:25am | editor
A slew of strategies is in place to counter any effort by ULFA to monger trouble the run-up to Independence Day.Talking to reporters in Guwahati on Saturday, Senior Superintendednt of Police of...

8 Aug 2012 - 6:08pm | editor
Simmering clashes in BTAD areas dominated parliament proceedings when it resumed on Wednesday forcing the Lok Sabha Speaker to adjourn the House for a few hours. The Opposition parties storm the... 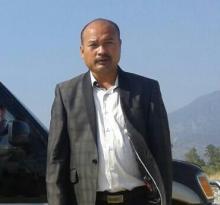 18 Mar 2016 - 9:59am | Hantigiri Narzary
The AIUDF party announced 19 names of the candidates to contest the ensuing assembly election in the state which included Kokrajhar west LAC on Thursday. Dahit Chandra Brahma has been named as...