Nagaon District Football players Association organised 2-day-long event “Asomor Na-Purani Football Kheluwair Priti Samaroh" at Nurul Amin Stadium on 12 & 13 July 2008. On the first day, the flag was hoisted by the President of All Assam Football Association. The secreatry of Nagaon Sports Association, Pradeep Hazarika offered Shardhanjali. Other players also offered Shardhanjali in memory of the players who passed away. On that day a friendly football match between the veteran players of Nagaon District was held.

A souvenir was released at the function. 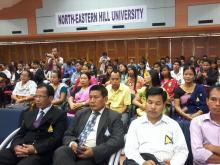