UDALGURI:Along with other parts of the state,the 12-hour state-wide bandh called by six organisations demanding scheduled tribe (ST) status for six communities disrupted normal life across Udalguri district on Monday.The bandh paralysed normal life with business establishment,government,private offices, markets and shops remaining down shutter.The major townships of the district including Kalaigaon,Tangla,Dimakuchi,Mazbat,Khoirabari,Rowta,Harisinga Mazbat,Panery,Udalguri,Rowta evoked full response.While vehicles, except those belonging to security personnel and on emergency services, remained off the roads.  The bandh was initially called for 48 hours until its duration being reduced to 12 hours on Monday morning.The six communities such as Moran, Motok, Koch-Rajbongshi, Tai Ahom, Sutia and Adivasi or tea tribe have for long been demanding ST status.The six communities believe that if they are accorded ST status, they can benefit from the advantages of reservation in education and government employment. 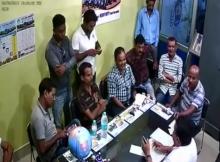 24 Aug 2017 - 2:00pm | AT News
The recent attack on a team of former ULFA rebels by a trader and his associates runs into a hail of anger and protest and anger across the state. The anger grips among the youths who virtually want...

9 Mar 2009 - 9:41pm | editor
A devastating fire that broke out at Paltanbazar area in the city of Guwahati ravaged properties on Monday morning. According to information, the incident took place at a Building which later was...

12 Oct 2016 - 11:14am | AT Kokrajhar Bureau
Preparation has so far completed today to hold 19th Daoharu Mungkhlong trophy at Dotma play ground beginning from Wednesday in Kokrajhar district. The trophy has been organized every year in memory...