As many as eleven people from Panikhaity area in the outskirt of the city have been admitted to the Guwahati Medical College following some complaints resembling to kala azar. But the medical authority have yet to confirm it saying kala azar could be confirmed only after the necessary test. But his has forced the authority to sound alert in view of these chronic and potentially fatal parasitic diseases. The GMCH authorities have said they have been conducting tests but the results have yet to come. The state health department is set to sent instructions to all district administrations to deal with the situation firmly. 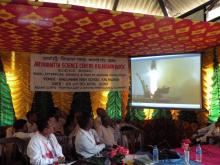 3 May 2010 - 12:34pm | Jayanta Kumar Das
The science based competitions organized at Bholabari High School near Kalaigaon on April 29 and 30 by Aryabhatta Science Centre,Kalaigaon in association with Assam Science Technology...

12 Jan 2012 - 7:20pm | editor
Good news for teacher job aspirants. The Assam government is in a process to fill up the vacant post of teachers by mid-April. The candidates selected in TET would have to appear in district-level...

14 Jul 2015 - 3:42pm | AT News
At least 25 people has a providential escape when the chopper carrying them noselanded on a highway in Sonitpur district on Tuesday.The incident took place at Tetubari near Gohpur area in the...