Over 300 people travelling at the Rajdhani Express had a narrow escape when their coach caught fire on Saturday.

The incident took place at the Rajdhani Express down in the morning. Passengers in the Coach No 7 suddenly came to notice smokes bellowing inside the coach as soon as the train arrived in Sarupeta station at around 6 in the morning.

When the passengers brought it to the notice of the officials, the train was halted and the entire coach was vacated.

The fire, which was extinguished within half and hour, was believed to have erupted because of technical snags.

13 Jan 2011 - 10:05pm | bishwajeetsinha
This year the Nagaon enthusiastic 'Bihu' lovers are having something precisely to worry much beyond chilliness woes gathering surrounding Nagaon city. The common man is having tough time ahead...

29 Feb 2012 - 2:49am | editor
At least five people sustained injury when suspected ULFA exploded a powerful grenade in Guwahati on Tuesday. The incident took place in front of the Assam state BJP office in the busy Zoo Road at... 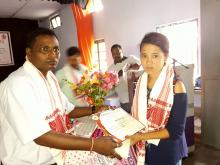 27 Jun 2017 - 1:57pm | Akshaya Pranab Kalita
The Human Rights and Anticorruption Forum of Namrup organised an award distribution ceremony among the students who excelled in last HSLC and HSSLC examination at BVFC HS School on Tuesday. ...