Prime Minister Narendra Modi comes in for sharp criticism across the state a day after he advocated allowing Bangladeshi migrants to work in the north east with visa.

Sharply reacting the move a day after chief minister Tarun Gogoi opposed it, All Assam Students Union (AASU) said that they won’t allow the Centre to do it. Talking to Assam Times, AASU leaders alleged that the move would harm the entire region.

“At a time when we have been struggling to detect and deport the Bangladeshi immigrants the prime minister is trying to downplay the issue even by ignoring his poll promises. It would further compound the issue,” said an AASU leader.

An AJYCP leader said,” BJP is also trying to politicise the issue fearing dent in minority voters. Congress and BJP are two sides of a same coin.”

7 May 2014 - 9:09pm | AT News
Chief minister Tarun Gogoi reviewed the state’s law and order at a high level meeting with Chief Secretary and DGP at Koinadhora in Guwahati on Wednesday.Hours after his BTAD visit, Gogoi talked to... 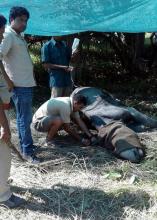 28 Oct 2016 - 11:01pm | Mubina Akhtar
An ideal habitat for the breeding of rhinos, Kaziranga has seen a rise in the number of the species. The animal shrugged off its ‘endangered’ tag as soon as its population crossed the 2000 mark. This...

30 Oct 2012 - 4:17am | editor
The All Assam Students' Union on Monday demanded steps to complete the work on updating the National Register of Citizens before the 2014 Lok Sabha polls. Addressing a press conference in Guwahati,...