With a pledge to oppose all acts of terrorism and militant violence, Assam observed the 'Mourning Day' across the state on Saturday to mourn the tragic death of 18 people, mostly schoolchildren, in a bomb blast at Dhemaji on Independence Day in 2004.

Chief minister Tarun Gogoi administered oath to the state government employees at the Dispur Secretariat at a brief function. Chief Secretary Jitesh Khosla and senior officials and employees of the Secretariat attended the function..

The employees in all the district and sub-divisional headquarters observed a minute's silence at 11 in the morning in memory of those who lost their lives at Dhemaji.

The national flag was flown at half mast in all government offices/educational institutions.

Dhemaji Deputy Commissioner convened a public meeting in which leading citizens, members of civil society and students were invited to take part

The blast was carried out by ULFA militants at the Dhemaji College Ground during Independence Day celebrations. ./ 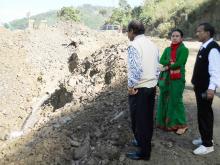 2 Jul 2013 - 11:48am | AT News
Despite strict vigilance Kaziranga is yet to get rid of the repeated rhino poaching incidents.Yet another body of rhino was found in the national park on Tuesday. The hornless rhino body was spotted...

5 Feb 2009 - 4:28pm | editor
There is report of a simmering tension in North Lakhimpur district as two Pakistani flags were seen flying in two interior areas on Wednesday. Confirming this, police officials told reporters that...