‘Strong security arrangements were made on the day to stop untoward incidents in the district,besides transport communication was escorted in passing them through national highways and no any report of untoward incident was reported from any part of the district’, said a senior police officer.

13 Jul 2015 - 12:58pm | Dibya J Borthakur
Normal road service came to a grinding halt for several hours in Raha when thousands of people blocked the National Highway for not allowing to set up AIIMS in central Assam.With banners and festoons... 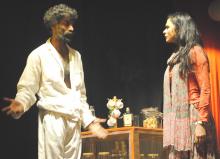 16 May 2010 - 7:00pm | trishnalineog
Ansh Theatre group of Mumbai performed "Joke" at Rabindra Bhawan, Guwahati on May 12. The play was written and directed by Makrand Deshpande. "Joke" was staged under the banner of Zerifa Wahid...

No impact of NDFB-S bandh in Sonitpur

27 Mar 2014 - 8:58am | AT News
A 12 hour Sonitpur bandh seems to have evoked hardly any response in the district on Monday.Shops and markets, schools and colleges, banks and offices are running as usual in the entire district even...