A Special Rhino Protection Force is coming up in Assam. It will help Kaziranga, Manas and Pobitora check rhino poachings in near future. Another project on the card is a special task force to deal with encroachment in the Kaziranga National Park along with other the other forest land. These were more or less of what Prakash Javadekar said just before the Union Environment and Forests Minister had left back for New Delhi on Saturday. According to the minister, in the initial stage local youths would form the force as they knew both the forests and animals.

Paranjoy Guha Thakurta will attend Guest of the Month program

21 Jul 2012 - 1:09pm | editor
A daylong media orientation program with an aim for encouraging and developing ethical journalism has been organized on Thursday (July 26, 2012) at Guwahati Press Club. Paranjoy Guha Thakurta, an... 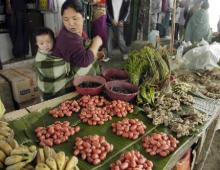 22 Apr 2008 - 1:45am | editor
A Naga lady is selling local vegetables in the supper market of Kohima, the capital city of India's northeastern state Nagaland on 21-04-08. Photo by UB Photos.

14 Jan 2015 - 7:30am | editor
Braving a biting chill, the entire state is soaked in Magh bihu festivity on Wednesday. Every household is busy with the last minute preparations a day before the much vaunted festival of feast.Today...