Lakhipur to go to bypolls today

Lakhipur in Cachar district is all set to go to the bypolls on Saturday along with Silchar ad Jamunamukh.

Altogether 137,398 voters will decide on the fate of five candidates in the voting process which is set to begin from 7 in the morning.

Poll officials have already left for the assigned booths with electronic voting machines on Friday morning.

Lakhipur is set to go to a triangle contest in the bypolls. The ruling Congress has fielded Rajdeep Goala while Sanjay Kumar Thakur is the BJP nominee.

AIUDF is fielding Mukesh Pandey in the constituency. The counting will take place on September 16.  Bypoll was required following death of sitting legislator Dinesh Prasad Goala.

27 Sep 2015 - 2:09pm | Hantigiri Narzary
Railway tracks are required to boost surface communication network. But construction of a railway track is not allowed at the cost of a green surrounding. That’s objectionable. The felling of... 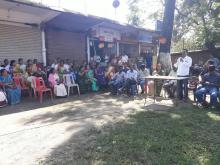 8 Nov 2017 - 8:02pm | Akshaya Pranab Kalita
November :- Namrup BJP also observed anti black money day to mark the one year of demonetization.  One after another speaker in a public  meeting presided by Bhaba Gogoi, heaped praise on...

20 Jan 2008 - 3:22pm | pallavibarua
No sooner the International Olympic Committee gave the green signal to China for hosting the 2008 Summer Olympics, the Chinese Government has been busy renovating and constructing some of the...