The United Liberation Front of Asom (Independent) seems to have unleashed a reign of terror in the run up to Narendra Modi’s visit slated for Saturday. ULFA militants belonging to Paresh Baruah faction shot dead a Hindi speaking man in Lakhimpur district on Thursday.

According to police, two motorcycle-borne assailants started indiscriminate firing at a trader near a petrol depot in the town early in the morning.

Identified as Kumud Kumar Patel, the trader died on the spot while two others sustained injury. The duo have been identified as Santosh Patel and Rupak Kumar who are undergoing treatment in the hospital. 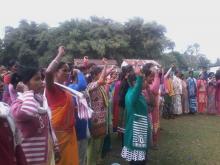 20 May 2017 - 9:47pm | Sunil Khabacha
The 73rd Commemoration of Battle of Imphal was observed here on Saturday to fondly remember the fallen soldiers of Imphal Battle of World War II. The event was organised by Manipur Tourism Forum (MTF...

17 Sep 2015 - 10:06pm | AT News
Yhome F.C thrashed Phezhu boys club Jotsoma 4-0 in the first football match at Kohima local ground on Thursday. Vilhoubutou opened the account of Yhome F.C in the first 13 minute while the...