No trace of Dudhnoi trader

There is trace of Ganesh Dutta 24 hours after the trader went missing from Dudhnoi.

According to allegations, a group of unidentified miscreants took away the businessman from in front of his house in Dudhnoi town on Monday night. Acting on the FIR, Dudhnoi police have been continuing the search operation. But the police officials tracing the case are tightlipped on the development. 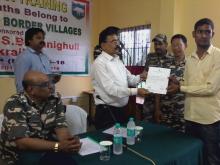 20 Jun 2012 - 3:31am | editor
The overall flood scene remain unchanged on Tuesday. But the death toll have gone up to 8. The mighty Brahmaputra and its tributaries are flowing above the danger level. More and more areas are...