Meet on cyber laws in Guwahati

A crucial meet in Guwahati on Saturday is expected to give more teeth to deal with the cyber crimes across the north eastern regon.

Jointly organized by the Gauhati High Court and the Assam Judicial Academy, the two days regional meeting at the Assam Administrative Staff College in Khanapara will thoroughly discuss the need to sensitise the judges, public prosecutors and investigating officers of the north-eastern region on the issues and challenges pertaining to the field of cyber law.

24 Feb 2014 - 9:28pm | AT News
At least eight persons sustained serious injuries when suspected NDFB-S militants exploded two powerful grenades at a market in Kamrup district on Monday.The grenades exploded at 6-30 in the evening... 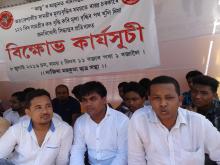 All out against price hike

8 Jul 2016 - 1:42pm | SK Hasan
Nazira AASU unit staged its dharna on Friday against the spiralling price rise following the hike in VAT against 127 goods. Hundreds of student activists thronged Nazira town in the morning where...