Eerie silence in Moltuk after ambush

An eerie silence prevails in Chandel district of Manipur bordering Myanmar a day after the insurgents killed 18 army jawans on Thursday.

But the security forces yet to fan in the Moltuk area fearing more ambush after the deadly attack by the insurgents killed the jawans belonging to the 6 Dogra infantry regiment.

The 12 other jawans who sustained injury are battling for life at the hospital. The ambushed took place along the village Indo-Myanmar Road in between Paraolon and Chalong Villages, in Chandel district.

The ambush took place when another regiment was on the way for replacement.  The entire area was cordoned off. No body was allowed to visit the area.

The panic stricken villagers could not sleep at night while a section of the villagers have started leaving their homes in search of safer place.

Today’s mindless attack in Manipur is very distressing. I bow to each and every soldier who has sacrificed his life for the Nation.

BPF convention from May 13

7 May 2016 - 6:08am | AT Kokrajhar Bureau
A massive preparation has got underway to hold 3rd triennial convention of the rulling Bodoland Peoples’ Front (BPF) with two-day long programme scheduled at Bodofa Cultural complex in Kokrajhar,... 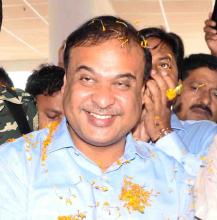 2 Sep 2017 - 9:13am | AT News
Prime minister Narendra Modi is all set to  reshuffle his cabinet on Sunday morning where as many as seven faces are missing paving the way for ten others which include Himanta Biswa...

25 May 2016 - 8:38pm | AT Kokrajhar Bureau
A school going minor student was injured after she jumped off a running vehicle to escape sexual assault by the driver at Mokrabari here in Kokrajhar today. Sensational prevails in Kokrjhar...
Follow @Assam Times