Dispur is preparing a set of papers to counter Arunachal Pradesh in the court of law over the 26 year old inter state border dispute.
Sources told Assam Times that the Assam government is fully prepared to properly respond to the Supreme Court’s order by the next couple of days on the recent plea accusing Dispur of resuming construction within the disputed areas.

A three-judge bench headed by Justice T S Thakur sought a response from Dispur within two weeks on the interim application of Arunachal Pradesh.

30 Jan 2014 - 2:12pm | AT News
Thousands of people in Lakhimpur and Sonitpur districts have blocked the National Highway No 52 to prevent supply of essential commodities to Arunachal Pradesh in protest against the firing incident... 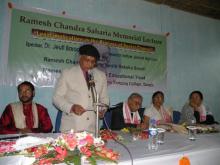 27 Dec 2014 - 11:23am | AT News
A critical approach on history came up for a livelier discussion when a panel of experts had a brainstorming session as part of the Guwahati Lit Fest on Saturday.Noted expert and former JNU professor...