This was a kind workshop was carried on for the first time by Mantraa with an aim to groom the upcoming and emerging models and fashion industry individuals by providing them professional training in activities leading to skilled behavior.

The grand finale was held at Mantraa Grooming Academy premises in Ganeshguri, Guwahati, on July 30 followed by a fashion show choreographed by Chow. Poran J. Gogoi while all the students received their Certificate of Participation.

Meghraj Upadhyay, chairman of Mantraa Group said, "It is our first initiative and we are happy to be supported by various partners in a short notice." He also added that youths of BPL families with proper documentations will be given free grooming in the future grooming sessions and workshops.

In her vote of thanks, Debjani Hazarika highlighted the importance of training and proper grooming for emerging models before they enter the glamour world and fashion industry professionally.

Upanash Preetam of Mantraa gave the welcomed the guests and participants in his welcome speech. 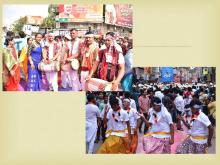 Bihu steals the thunder in Pune

7 Sep 2017 - 10:42am | Pranjal Saikia
North eastern culture drew huge appreciation in the city of Pune at the sidelines of the Ganesh Puja which concluded recently.  The centre of attraction was the bihu troops on September when...

22 Jan 2014 - 4:51pm | AT News
AICC general has totally dismissed any dissidence within the party legislative body saying that he has not heard of it.Talking to reporters in the sidelines of the party executive body meeting at the...

10 Aug 2015 - 12:33pm | AT News
The wreckage of the Pawan Hans helicopter Tirap Deputy Commissioner Kamalesh Joshi was found at a remote area of Arunachal Pradesh where it crash landed on Tuesday.The rescue operation made with...